ArcelorMittal Gent, the Flemish investment company “Participatiemaatschappij Vlaanderen” (“PMV”), Euroports and North Sea Port are collaborating on the first ever roofed loading bay and warehouse in Ghent: the “All Weather Terminal” (AWT). An investment worth more than 50 million euros.

The new terminal is being built next to the existing mixed cargo bay of ArcelorMittal Gent and will be used in the first place to store and ship finished steel coils. Twenty percent of the storage capacity can also be used for the handling of other materials such as paper or other mixed cargo. 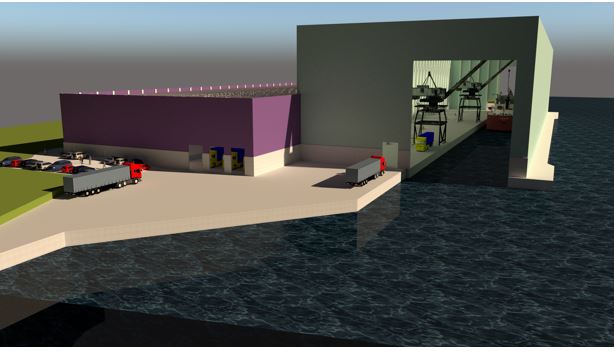 The new “All Weather Terminal” will be owned by AWT GENT NV, a company founded by PMV and EPICo (www.epicofund.eu). AWT GENT NV, who are responsible for the design, construction, financing, maintenance and exploitation of the Terminal. Thanks to “AWT”, AWT GENT NV will be able to provide services to ArcelorMittal Gent and other customers. AWT GENT NV entrusts Euroports with the role of maritime logistics, namely the distribution of flows from, to and in the AWT.

PMV was set up by the Government of Flanders with the purpose of investing in infrastructure for sustainable economic development. North Sea Port has granted AWT GENT NV land concessions for the construction of the terminal and they will also dredge the mooring basin. Euroports will take over terminal operations and Stadsbader, the renowned contractor of infrastructure works and large industrial projects, will be charged by Euroports to build and service the terminal.

“With the facilities that AWT GENT NV will be providing for ArcelorMittal Gent via the All Weather Terminal (AWT), ArcelorMittal Gent wishes to improve its services for customers even further,” says Manfred Van Vlierberghe, CEO of ArcelorMittal Belgium. “Previously, high-grade steel could only be unloaded with dry weather while this can now happen 24/7, irrespective of weather conditions. The AWT allows a more distributed supply of coils from the dispatching warehouse of ArcelorMittal Gent to the quay, and thus optimises the internal logistics. Euroports has accumulated a good deal of experience in the steel trade and has been working for years with ArcelorMittal. In addition, the use of the AWT, in combination with the existing ‘open’ mixed goods quay, is necessary to realize the growth of the Ghent-based steel company. The AWT is also an investment in sustainability because the higher shipping capacity per ship results in considerable savings in the number of transport truck movements (up to 25,000 trucks per year). ArcelorMittal Gent is committed to grow and becoming a leader in sustainable logistics.”

“The first ever AWT in Ghent enables an even more efficient bundling of the different flows of goods and gives companies more logistic options,” says Daan Schalck, CEO of the North Sea Port cross-border merger. “North Sea Port wants to play a facilitating role in terms of infrastructure to make the port of Ghent as accessible as possible via rail, road, sea and inland shipping. Through investments with different partners in the All Weather Terminal, North Sea Port is helping companies in Ghent to grow in a sustainable way.”

“PMV will once again support a major investment in Flanders, and will strengthen ArcelorMittal’s presence in the port of Ghent,” says Michel Casselman, CEO of PMV. “Supporting good projects and good businesses is one of PMV’s priorities, and anchoring industrial companies in Flanders remains an important goal. PMV leverages its excellent relationships with institutional investors such as insurers and pension funds to finance these types of infrastructure projects over the long term. With this project, PMV supports employment in the port of Ghent and is keen to realise similar projects elsewhere in Flanders in the future.”

Thanks to the collaboration between Stadsbader its advisors Abetec, SBE and MTPBS, the project was able to develop quickly. Dominique Valcke, CEO of the Stadsbader Group explains: “Despite the complexity of this large undertaking, the “All Weather Terminal” is characterised by its procedural brevity: 22 months, including the time required to approve and obtain a building permit. Both our logistical competence and our technical expertise are in place to achieve the objectives of the AWT, erected on the basis of a Design, Build & Maintain (DBM) contract.”

The “AWT” warehouse will have a storage capacity of 60,000 tonnes, it will be 240 metres long and 60 metres wide and fitted with 2 tracks on the quay. The warehouse will be equipped with 3 fully automated travelling cranes for unloading, sorting and loading goods. The roofed quay wall will be 200 metres long and the dock will be 25 metres wide. It will rise 27 metres above the water level. Ships with a tonnage up to 10,000 tonnes will be able to dock at the new quay. The pre-sorting zone will be equipped with 2 automated travelling cranes. Two telescopic cranes will be installed for loading and unloading ships. For Euroports – which has 26 terminals in Europe – this is a significant complement and an extension of its service offering in the steel and metals sector.

The contract was signed mid-June and the environmental permit has been applied for, so construction can begin at the end of 2018. The “All Weather Terminal” is expected to be operational by mid-2020.

About ArcelorMittal Belgium
ArcelorMittal Belgium, with sites in Ghent, Liège, Genk and Geel has 5,800 employees. The total direct and indirect employment is estimated to be 13,000 jobs. The company manufactures high-grade steel for the most diverse applications in the automotive sector and other industries such as construction, white goods industry, packaging industry, etc.

About North Sea Port
North Sea Port is a cross-border port area 60 kilometres wide. It extends from the area between Vlissingen, Borsele and Terneuzen up to 32 kilometres inland towards the Belgian-Flemish city of Ghent. Due to its central location in the logistical heart of Europe and the variety of transport links with the European hinterland, North Sea Port is truly an economic hub. The port can serve at least 500 million consumers within a range of 500 kilometres. With its 66.6 million tonne seaborne shipping platform, North Sea Port is one of the 10 largest ports in Europe.

About PMV
PMV qualifies as a company of action and daring (“doe-durfbedrijf” in Flemish) that shapes the future of the Flemish economy. PMV finances promising companies from their inception to their growth and internalisation. It offers tailored financial solutions to entrepreneurs who are able to present a sound financial plan and a strong management team. PMV does so with funds, loans and guarantees, as well as a strong and motivated team of 110 employees who strive daily to promote prosperity and well-being in Flanders. PWV has a portfolio of 1.2 billion euros in management.

More information can be found at www.pmv.eu

About Euroports
Euroports is one of the largest maritime infrastructure companies in Europe. It develops, operates and manages global marine supply solutions for a large number of international customers in various industries, and processes more than 60 million tonnes of bulk,
non-containerised, liquid cargo and containerised, per year. Euroports wants to be the first choice for the delivery of high quality maritime sourcing solutions. Euroports achieves this goal through its 26 deep-sea port terminals and 3,000 employees that offer a wide variety of
value-added services and multimodal shipping services around the world, all for one purpose: to offer lasting value.

By closing this message, you consent to our cookies on this device in accordance with our cookie policy unless you have disabled them. You can change your cookie settings at any time but parts of our site will not function correctly without them.

Any cookies that may not be particularly necessary for the website to function and is used specifically to collect user personal data via analytics, ads, other embedded contents are termed as non-necessary cookies. It is mandatory to procure user consent prior to running these cookies on your website.